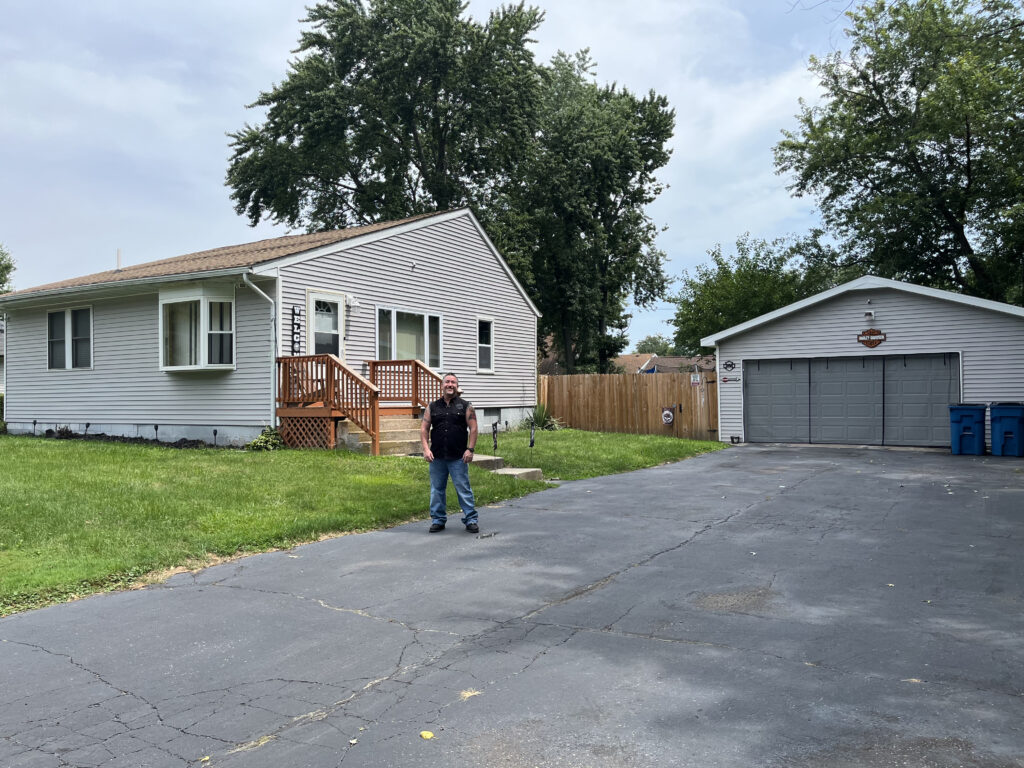 Pandemic-hit homeowners say state program saved houses: “It should be on a billboard”

The Porter County resident had been out of work since the pandemic first blasted into the Chicago area, where he’d worked as a tile-setter. Bauer said he resisted applying for unemployment benefits, but folded as the pandemic dragged longer.

Illinois ended its federally enhanced unemployment benefits in September 2021. Bauer’s wife, Cynthia, succumbed to Covid-19 on New Year’s Day. Six days later, a propane heater in the garage — feet away from Bauer — exploded into a fire that consumed the garage, melted his utility meter and damaged his house’s siding, roof, windows and door.

Bauer’s income dropped to near-nothing as the expenses, insurance complexities and grief piled up. By early 2022, he’d fallen behind on the mortgage for the house his wife had bought in 2006.

It was by chance — in a local publication’s newsletter — that Bauer in March learned of the program that would set him on a path to keeping his house: the Indiana Homeowner Assistance Fund.

“I thought, ‘Man, what does this all mean? What is this?’” Bauer said.

“I put in the application. Didn’t hear anything. I forgot about it, more or less, said, ‘To heck with it, don’t get upset about that, there are other things going on,’” he added. “And then my phone rang, from a number I did not know…so I grabbed my phone and said hello.”

Bauer was accepted to the program about two months after he applied, and could begin the monthslong process of getting help.

“It’s sad that I had to stumble on that article,” he said. “I almost feel like it should be on a billboard.”

‘We’re getting money out the door’
The U.S. Congress established Homeowner Assistance Funds when it approved the American Rescue Plan Act in 2021. Indiana’s program, administered by the Indiana Housing and Community Development Authority, soft-launched in February — and officially in mid-March.

It’s since disbursed more than $7 million in assistance and has earmarked about $2 million more to disburse soon, according to an application portal. Successful applicants are getting an average of $990 a month delivered directly to their loan servicers to help with an average $10,300 mortgage delinquency.

For Bauer and others, it’s been a lifeline.

The help maxes out at six months or $35,000 and comes as a forgivable loan: 20% is forgiven each year a homeowner stays in the house, meaning it’s forgiven in five years.

And the state has a lot more to give. The running total is just over 4% of the program’s $167 million budget. Indiana has until September 30, 2026 — for now — to disburse the funds, according to IHCDA Director of Asset Preservation Chris Nevels. After that, the U.S. Treasury will take any leftovers back and could redistribute it.

“As is the case with any big government program that’s dealing with hundreds of millions of dollars, it can take a while to get going. There’s a lot of things you have to figure out and get running smoothly. But overall, I think we’re doing a really good job,” Nevels said.

“I think the most important thing is that, you know, we are helping people,” he added. “We’re getting money out the door to homeowners who are in need. That money is going across the state.”

Hoosier homeowners are eligible if they’ve experienced a Covid-19-related financial hardship since Jan. 21, 2020, meet an income threshold, own just one mortgaged house and consider it their primary residence, according to the program’s website. Some types of assistance come with additional underwriting criteria. Even those who are in bankruptcy can apply.

Hoosiers have submitted nearly 5,500 applications as of August 8, according to the portal. The program has approved nearly 900 and is waiting on responses from loan servicers on an additional 1,425. It’s also denied or closed about 1,300 applications, which Nevels said typically happens when an applicant doesn’t meet the eligibility requirements.

Typically, it’s 20 to 25 case managers, plus other staff, handling all those applications, according to Nevels.

Kindness goes far
And the program’s ramping up.

“At the start of the program, we didn’t want to overwhelm our team and start off behind the ball,” Nevels said. “So we didn’t start out with a huge marketing push or anything like that.”

Instead, the program was more targeted. It contacted people on a notification list launched when the program was initially announced and marketed to community organizations and other grassroots groups, according to Nevels.

Now, the program’s branching out to digital marketing and mobile intake events. And Nevels said the team was continuously identifying bottlenecks — like the 1,370 applications pending loan servicer approval — and coming up with solutions.

But even as the program broadens its reach and streamlines its processes, Nevels emphasized the importance of customer care and accuracy.

“We definitely want to review more applications and review them faster,” he said. “But at the end of the day, I would rather have our [quality assurance-quality control] process … and make sure that everything is accurate.”

A second bout of Covid-19 early in 2021 nearly sent Cochran to the hospital, but recovery eluded him — instead, exhaustion followed. He slogged through 12-hour workdays bookended by a commute to Cincinnati that could stretch to 90 minutes each way.

“By May, I couldn’t work the job anymore,” Cochran said. “… I found this insurance job from home, but I couldn’t seem to think.”

That, he discovered in November 2021, was due to brain inflammation. That month, Cochran was diagnosed with rheumatoid arthritis, in which the body’s immune system attacks its own tissues.

Cochran got his insurance license, but found he wasn’t able to work consistently. By December 2021, he was struggling to pay the mortgage on the Ripley County house he’d bought in 2004. He got onto his first short-term forbearance plan in the spring of 2022. Then, a mortgage company staffer mentioned the program.

“I started doing some digging and doing some research and I found it,” Cochran said. “I have to be honest, after I started speaking with [program staff], and how friendly they were and how great they were, they had me crying.”

[The case manager] is just amazing,” he said. “I just loved working with her and she put me at ease. And she’s helped me through filling things out and what I needed to be able to get to her.”

It’s been nearly two months since Cochran began working with his case manager. His assistance — about $16,000 — hasn’t been finalized, but he said he’s feeling “confident.” And he’s been on his medication for three months, adding that while he still struggles, he’s able to work and otherwise function each day.

“I’ve made a lot of phone calls to try to be able to get some help,” Cochran said. “There’s some gruffness, and when you’re not feeling well and you’re having a hard time that just compounds it, especially because you feel embarrassed in trying to ask for the help.”

“But the compassion and the kindness that I have had from those folks, that would be the thing that I would want to be able to share,” he added. “Because you feel it.”

Bauer said his $5,000 in assistance — plus late fees — also wasn’t finalized, but that he was nearing the end of the process. Bauer said his case manager made him feel as though he had a “partner” in his path to financial recovery. In addition to the mortgage assistance, he has been connected to help for food, utility payments and even home weatherization.

“When I’m gone, [the house] will be passed on,” he said. “My daughter will have it, whether she likes the paint in it or not, and that promise will still continue.”

Leslie joins the Indiana Capital Chronicle after covering city government and urban affairs for the Indianapolis Business Journal for more than a year. She graduated from Northwestern University in March 2021, and has reported for the Chicago Tribune, Voice of America and student publications in Evanston, Illinois, Washington, D.C., and Doha, Qatar.

Leslie joins the Indiana Capital Chronicle after covering city government and urban affairs for the Indianapolis Business Journal for more than a year. She graduated from Northwestern University in March 2021, and has reported for the Chicago Tribune, Voice of America and student publications in Evanston, Illinois, Washington, D.C., and Doha, Qatar.