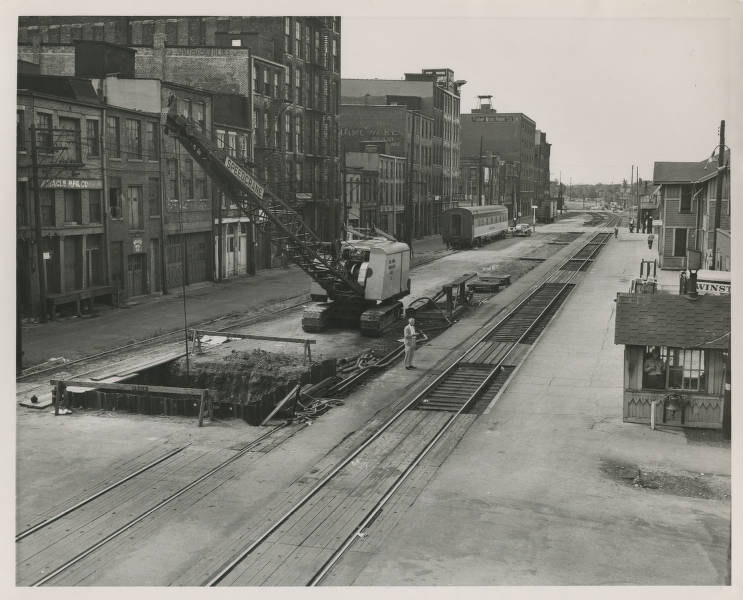 While many think of Fort Wayne as a largely German town, it was another cultural group that built the infrastructure necessary for Fort Wayne to boom. Early local infrastructure projects like the Wabash-Erie Canal and railroad were built in large part by Irish immigrants to Allen County and Fort Wayne. These projects had a lasting impact on the industry, population and culture of the city, yet the Irish rarely receive recognition for their hand in building the Summit City.

According to local Irish history expert Rob Stone, a wave of Irish immigrants came to Fort Wayne seeking employment, but many businesses denied them, posting that “Irish Need Not Apply.” Despite this roadblock, organizers for the canal hired the Irish in the mid-19th century to build the legendary waterway which connected Fort Wayne to Toledo, OH.

Still, there were factions among the Irish working on the canal. Bloody skirmishes emerged and culminated in what is known as the “Irish War.” Two groups who had historic animosity toward each other in Ireland brought their hostilities to Northeast Indiana, and both groups were employed by the canal. According to a letter of correspondence written by canal organizer David Burr to Indiana Gov. Noah Noble, “On the tenth of July the parties hastily collected; or rather, they left their work and commenced a march towards the center of the line for a general battle.”

Burr reported that, overall, there were more than 600 Irishmen who had prepared for armed and organized battle. “In the meantime, the citizens at Huntington had become exceedingly alarmed at seeing this hostile array; three or four hundred armed men on each side had the avowed intention of meeting in battle; the civil authority was completely powerless.”

These citizens, fearing that they and their property would not be safe, asked Fort Wayne for aid of the militia, which within a few hours was sent to their relief. At the same time, Huntington had also collected a contingent. The Irish town of Lagro also became alarmed and asked Huntington to aid in their defense.

The conflict was quelled, and crisis averted. Eight “ringleaders” were arrested and transported to the secure Indianapolis jail. The canal company passed new regulations allowing them to dismiss unruly workers and to keep record of their name for future denial of employment.

The Wabash-Erie Canal was soon completed and left a lasting impact on Fort Wayne. Many streets were named for the canal and boat operators, and businesses sprung up alongside the waterway. Today, The Landing is the predominant reminder of the legacy that the Wabash-Erie Canal left on the city. The location of this small group of buildings and businesses on Columbia Street was known as a “landing” in terms of boat travel and docking. Just north of the landing is Dock Street, near where, of course, boats would dock at the landing.

The old canal house still stands on Superior Street as evidence of the waterway and of the work of the Irish on the canal. While the canal itself was later filled in and subsequently replaced in large part by the railroad, a feeder channel can be found cutting through the campus of Purdue University-Fort Wayne at the Plex. This significant contribution by the Irish to the history of Fort Wayne, as well as its present, is often not attributed to the Irish laborers who built the canal.

After the completion of the canal, many of the Irish who had a hand in its construction stayed in Fort Wayne and the surrounding area. At this time, neighborhoods were largely separated by ethnic group, and the local Irish neighborhood was known as “Irishtown.” Stone says that he was able to remap the historic neighborhood based on old city records.

“Interestingly enough, I was the first, really, to dig into Irishtown. There have been mentions of it in different articles and stuff, but there wasn’t a whole lot written on it.”

Stone started by looking at old city directories and street maps, marking those with Irish surnames on the maps. By doing so, he was able to reconstruct the Irishtown neighborhood and what families lived there.

Similar to the German immigrants who found their cultural anchor in the Lutheran community in Fort Wayne, the Irish cultural anchor was the local Catholic community. The Irish got their own parish around 1889 with the construction of St. Patrick on Harrison Street. The school was founded three years prior to the dedication of the parish, intended to serve children who lived “south of the tracks” in Irishtown, according to the parish.

Stone says that there are preliminary plans to build a plaza dedicated to the historically Irish neighborhood in the area near the intersection of Taylor Street and Fairfield Avenue. He added that the neighborhood even had its own baseball team called the “Irishtown’s” that would play games against other neighborhood teams in Fort Wayne.

The city had the biggest Irish influence from its start in 1794, according to Stone. Gen. Anthony Wayne was the son of an Irish immigrant. Early Fort Wayne settlers Samuel Hanna and Allen Hamilton, he added, had Irish ancestry.

Today, Fort Wayne’s Irish identity is largely forgotten. After the World Wars, ethnic and cultural lines began to blur, and neighborhoods that had once been defined by country of origin disbursed. While this softening of attitudes had significant benefits for the community and the nation as a whole, a lot of cultural identity was lost. The Irish population of St. Patrick Parish in Fort Wayne has shrunk, and the parish has become largely Hispanic, and St. Patrick Parish in Lagro was closed in 1998 due to dwindling numbers.

Stone aims to change that. He is working with community and neighborhood leaders to reignite city pride in its Irish history. He’s also working on a book about local Irish history. “A lot of people know about the German history because of Germanfest and things like that, but there’s a lot of Irish influence.”

When asked for comment, representatives from the City of Fort Wayne stated that the city is “engaging with members of the community on both the past and future of Irishtown and will have additional information in the coming months.”

While the contributions of the Irish to Fort Wayne were significant, today the history of their presence is not well remembered or preserved by its residents. However, through the efforts of neighborhood leaders, city officials and local historians, Fort Wayne may soon memorialize and honor the immigrant group that built its infrastructure and empowered the city to prosper.