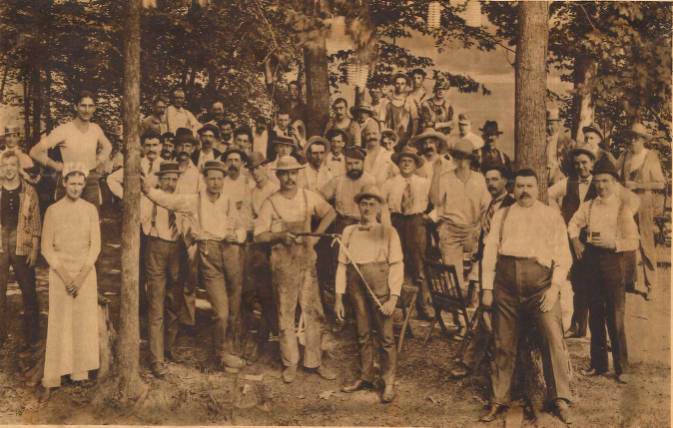 Fort Wayne has been considered a predominantly German town since the 19th century, and the influence of its German ancestors continues to the present day. Many mayors, businesses and citizens can trace their origins to Germany. In fact, at its peak in the late 1800s, the German makeup of the Summit City was reportedly as high as 8 in 10 people. Today, those with German ancestry still make up 26.5% of the total population of Fort Wayne. Why did a significant number of German immigrants choose Fort Wayne as their home, and how is their impact still seen today?

Local German history expert Jim Sack says that the first German immigrant, Johann Kaiser, came to Fort Wayne in the early 19th Century. Soon after Kaiser, he says, Henry Rudisill arrived in town on Christmas Eve in 1830. According to Sack, Rudisill was “chased into town by wolves” on his way from the Cincinnati, OH, area. Rudisill’s arrival in Fort Wayne paved the way for the flood of German immigrants that would follow for the next several decades, a wave that would continue to influence Fort Wayne’s culture in 2022.

Although he, himself, was not an immigrant, Rudisill established the first Lutheran church in Fort Wayne, which became the cultural anchor for Germans immigrating to the area. Businessmen John T. Barr and John McCorkle had purchased land near the confluence of the three rivers and laid out several roads. These two businessmen asked Rudisill to settle and develop the land.

“They needed somebody to be a property manager, essentially, and that’s what Rudisill was,” Sack says. “They brought him to town, paid him money, told him to sell off some of the grounds so that they could make their money back, and also rent some of it so that they can continue with passive income – making a little money here and a little money there.”
Sack says that Rudisill tried to get the Americans who had already settled in Fort Wayne to do work, but Rudisill said that they “demand too much and they work too little. So the result was that he started advertising for Germans. He asked Barr and McCorkle if he could do that. They said yes, he started advertising to Germans and success followed. They started coming here. They would work for less. They would work harder.”

Part of the motivation for coming to the United States, Sack says, was German economic hardship due to the English industrial revolution which had rendered many German industries unfeasible.

German immigrants settling in the United States faced language and employment barriers, on top of learning to assimilate to American culture. The establishment of a Lutheran church in Fort Wayne, however, served to ease these issues.

“And that was really a critical element in bringing the Germans to Fort Wayne because they had, essentially, a social service agency on site welcoming them to town,” Sack says. The establishment of a Lutheran church in the community allowed German immigrants to prosper because those at the church could speak German, immigrants had immediate friends, and they had people who would employ them.

“It was a safety net. So instead of coming to the American wilderness and not knowing anybody and not knowing the rules, or being able to communicate, they had a ready reception committee.”

At the height of German influence in Fort Wayne, there were numerous German-language newspapers available for citizens. When Indiana adopted its 1851 constitution, 10% of the copies that were sent out were written in German. In the late 1880s and early 1900s, “Germania Park” graced the east bank of the St. Joe River. It was owned by German company Berghoff Brewing Co., and it hosted German Day celebrations until the onset of World War I, when anti-German sentiment rose.

During this time, Indiana Governor James P. Goodrich signed into law the anti-German language act, which “forbade elementary schools from teaching the language,” according to the Allen County Genealogical Society of Indiana. At the federal level, some Germans became “alien enemies” after President Woodrow Wilson issued executive orders that limited the rights and privileges of a portion of Germans living in the United States.

According to The News Sentinel, “Good citizens – even the sheriff of Allen County – who had not finished the details of becoming U.S. citizens found themselves having to register as ‘enemy aliens.’ Eavesdroppers spied on German Lutheran and German Catholic sermons, and a movement began to forbid the use of German language in the classrooms.” The newspaper also noted that the German-American Bank that had been founded in Fort Wayne in 1905 became Lincoln Bank due to rising anti-German sentiment.

The culture recovered somewhat after the end of the war, and another wave of German immigrants came to Fort Wayne due to the economic turmoil that Germany experienced after the war. Many had been attracted to Fort Wayne not only because it was a well-known German hub, but because much of the established industry in the city was German-affiliated. A group of these families, according to Sack, founded the Fort Wayne Sport Club which is still in operation today. The German-affiliated Lincoln Bank entered a new building, the Lincoln Tower, in the 1930s. The bank became the tallest skyscraper in the state and a symbol of German greatness and success in the city: and its architects claimed German heritage.

During World War II, the United States kept German prisoners of war at Camp Scott on Oxford Street in Fort Wayne. The POWs were put to work on farms and shoveling snow off of city streets. The News-Sentinel reported that one resident remembered the POWs setting up pins for a bowling alley before automatic pin-setting systems had come into use. Sack says that, after the war, many of these prisoners wanted to stay in Fort Wayne. They had been paid a wage that was able to be redeemed from a savings account at the end of the war.

Ethnic lines began to blur after World War II. Individual cultural heritage no longer had a tight grasp on many neighborhoods in Fort Wayne. Population centers became more diverse, and many began new lives in expanding suburbs, in large part not choosing where to live based on ethnicity or background. Although German heritage may not shine as brightly as it once did, efforts in the latter half of the 20th century sought to immortalize and remember this historic aspect of the city.

Sack, who had long been interested in German history, started Germanfest in 1981, and from there he wanted to continue learning about the German heritage of Fort Wayne. “I started just trying to learn as much as I could. And it was after that that I formed the German heritage society with Judge [Kenneth] Scheibenberger.”

One of the objectives of the German Heritage Society was to establish a sister city in Germany.

“And at the time,” Sack says, “I simply failed because there were hardly any available.” After trying city after city, Sack was unable to find a German city that wanted a relationship with Fort Wayne. Some time later, he tried again.
“I knew that East Germany was falling apart. I knew that the Soviet system was going to collapse.” Eventually, word came from the East German city of Gera.

That December, Sack met with the deputy mayor of Gera and told him “what a wonderful thing it would be to have a sister city and that we would have exchanges and everything would be sunshine and lollipops. And he was not swayed.”

Sack says that after about an hour and a half the mayor walked into the room. After once again explaining why Gera and Fort Wayne should pursue a relationship as sister cities, the German Mayor looked at the deputy mayor and said, “I think we could use some friends in America.” Gera became a sister city of Fort Wayne in 1992, the year after the collapse of the Soviet Union and two years after German reunification.

Notable German contributions to Fort Wayne include Germanfest, a number of mayors, the local Lutheran population, including Concordia Seminary, and even part of the city skyline. Those with German ancestry continue to comprise a large subset of the population of Fort Wayne. Although many visible aspects of German culture were lost during two world wars, the hard work of the local citizenry has allowed Fort Wayne to continue to celebrate its German heritage today.