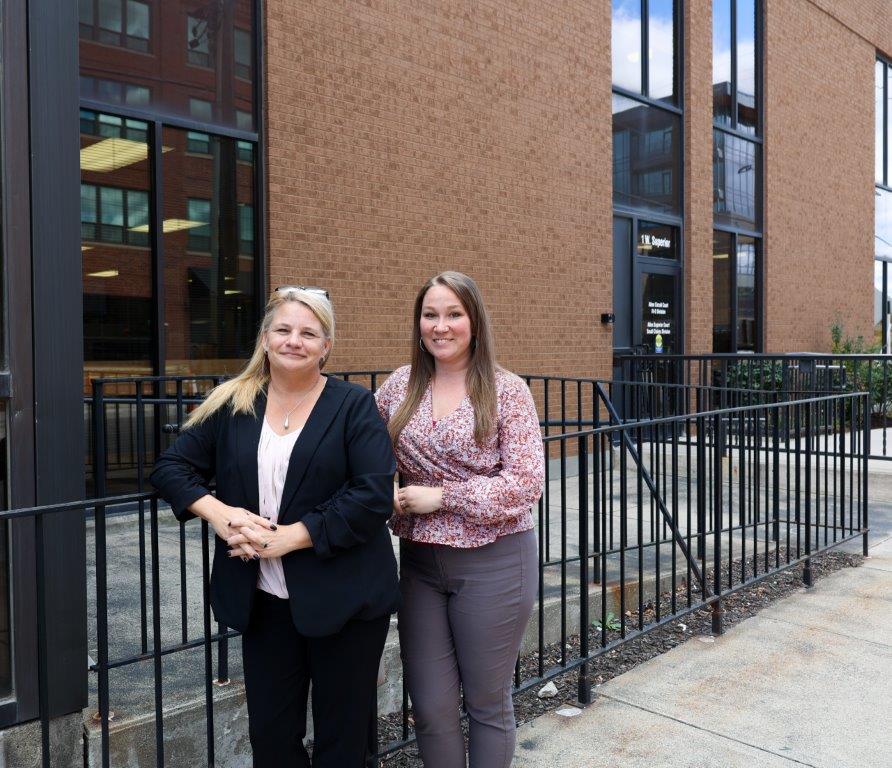 On any day that there are eviction cases on the docket at the Allen County Court’s Small Claims Division, there are people in the courtroom gallery actively looking for people they can help.

They’re with the Just Neighbors Interfaith Homeless Network’s Eviction Intervention Program, which opened in January and aims to help tenants avoid an eviction by providing financial assistance, or by offering referrals to legal representation and other social service agencies.

Since most eviction cases filed in Allen County have to do with nonpayment of rent, much of the team’s time is spent processing rental assistance applications. If a tenant is approved under the Eviction Intervention Program, Just Neighbors will pay their past-due rent, as well as rent going forward for a set period of time, in order to give tenants some leeway as they work to stabilize their finances.

“If you have an eviction, regardless of whether it’s your own making or not, something happened to cause you to get behind,” said Shirley Rork, the program’s director. Financial rental assistance can sometimes be the breathing room tenants need to get back on track, she added.

From January through the end of August, Just Neighbors had contact with 1,744 clients facing evictions. The majority – 1,024 – were for nonpayment of rent.

Beyond providing funds to help tenants avoid an eviction, Rork and her team also try to help tenants understand the process and what they’re up against inside the courtroom. They’re not lawyers, Rork stressed, and they don’t give legal advice.

“But we tell the tenant things in layman’s terms, so they can understand,” she said.

The team also tries to bring some empathy to the proceedings, said Alisha Gil, who is an eviction intervention coordinator for Just Neighbors. Under the law, the court can’t consider why someone has fallen behind on their rent. The Just Neighbors team, she said, also offers an empathetic ear and tries to understand the reasons why a person is struggling.

“We don’t treat them any differently and I think they’re inclined to listen to us because we return the favor and listen to them as well,” she said.

The rental assistance provided by Just Neighbors isn’t a subsidy, Rork stressed. It’s meant to mitigate a crisis. And so when processing applications, the team looks at why a person fell behind on their rent, whether they’ve received rental assistance before, and whether the tenant has the ability to pay going forward.

The Small Claims Division, which is led by Allen County Superior Court Judge Jennifer DeGroote, has been gracious to the Just Neighbors team by allowing them to observe hearings in the courtroom gallery, Rork said. The court doesn’t have to do that, she said, and in many other jurisdictions, the court doesn’t. Beyond that, Rork added that the court has been open to listening to suggestions her team has had for how to improve the process.

“They listen to us when we say things, we notice things,” she said.

At first, the court was leery about allowing advocates into the courtroom for fear of disruptions to court proceedings, Magistrate Brian Cook said. That has not happened, he said.

In an interview, Cook described the group as respectful and helpful during court proceedings. And when asked, the team has at times been able to provide the court with useful information regarding a tenant’s case, he added.

The Just Neighbors Eviction Intervention Program is important not only from a rental assistance standpoint, but because it is creating a network of social service agencies that can help tenants with various aspects of the eviction process, said Andrew Thomas, a housing resource attorney for Indiana Legal Services, Inc.

There are three essential things that are necessary when helping tenants facing housing issues, he said: rental assistance, social services and legal representation. Just Neighbors is the conduit between them, he said. The team’s presence in the courtroom helps make all of that possible.

“What I think helps Just Neighbors have a successful program is they are there,” he said. “They are in the court and they can help people fairly quickly, with empathy and treat people with dignity.”

The team’s presence in the courtroom also serves to build relationships between advocates, court staff, landlords and attorneys, Thomas said.

“It’s easier to work with landlord attorneys if we’ve all been talking to each other for a couple of years,” he said.

Even with courtroom access, Rork and her team still face challenges reaching tenants. The entire process is easier, and the program is more effective the earlier it reaches tenants who need help. Often, the Just Neighbors team doesn’t connect with tenants until the day of their hearing.

But changes to the way the Small Claims Division handles eviction cases could help with that. As of Nov. 1, all new eviction cases filed in Allen County will require a preliminary hearing with the court’s eviction liaison, who will explain the process and outline the options available. Additionally, at least 20 days must pass between the tenant being notified of the eviction’s filing and the actual hearing.

At that preliminary hearing, tenants can choose to take the matter to trial or sign what’s known as an agreed judgment. Under an agreed judgment, the tenant acknowledges they are in breach of their lease and the eviction is noted on their record. The tenant then has seven days to vacate the property. After that, the landlord can request the Allen County Sheriff’s Department send a deputy to remove the tenant from the residence.

Those changes are a step in the right direction, Rork said, noting that they will give her team more of an opportunity to reach tenants and landlords before the trial phase. But she’s still concerned about reaching tenants before their preliminary hearing, since they could walk away from that meeting with an agreed judgment without ever speaking with her team.

That’s why it’s important for tenants in danger of eviction, regardless of whether it’s for rent nonpayment or another reason, to seek assistance as soon as possible, Rork said. Especially if they’ve been notified that an eviction has been filed. The more time they have to work with clients, the better.

“A lot of the contact that we get is email and phone contact,” Gil said, noting that it takes time once a tenant makes contact to gather the necessary information to process an application. This can be particularly difficult for older people and those who don’t have access to a computer or cellphone.

The need for that network of support continues to grow, Thomas said. Prior to the COVID-19 pandemic, sometimes the best solution for a tenant would be to vacate their home and find a new place to live before an eviction could be filed. But lately more and more tenants simply have nowhere else to go.

“Having a network of organizations and the ability to talk to each other – it sounds so simple, but it’s extremely important in an effort like this,” he said. “The pandemic itself brought a lot of these organizations together that may in the past have been more siloed.”

Just Neighbors and Indiana Legal Services are so committed to helping tenants, Thomas said, because an eviction “all too often is the beginning of an all-encompassing spiral downward.”

“We see it again and again,” he said. “Someone gets evicted and they can’t find housing after that. They can’t get good employment because they may have lost their job focusing on the eviction issue. There are mental health issues, social issues, kids may have to move school districts and may be destabilized that way.”

Tenants who have faced evictions may live in unsafe or unhealthy housing conditions because of their prior eviction, and in some cases lose access to public housing options, Thomas added.

“Too often that focus point, the thing that really starts that spiral downward, is the eviction against the person,” he said. “I think that’s the main reason we’re just so interested in helping tenants keep stable housing.”

Because of those issues, Rork and her team take their work personally.

“I feel that every person I work with, I have some kind of protectiveness for them,” Rork said. “So when something happens that is unfair or someone treats them like they’re less-than, I get upset, because as a human being everybody is created equal.”

Gil said she was drawn to her job out of a sense of community. It’s a wonderful feeling, she said, when she gets to call a tenant and tell them they were approved for assistance.

“It’s pure elation, she said. “The approval calls, nothing makes me happier than being able to make them. It’s just nice to be able to do that with somebody who otherwise might not have made it through.”

To apply for rental assistance or to learn more about Just Neighbors’ Eviction Intervention Program, call 260-458-9772 or email shirley@ihnfw.org.

Dave Gong is a freelance journalist and the community engagement coordinator for the Fort
Wayne Media Collaborative. Dave has a Bachelor of Arts in Journalism from Northern Illinois University
and a Master of Arts in Public Affairs Reporting from the University of Illinois-Springfield. From 2014 to
2021, Dave covered Fort Wayne and Allen County, as the Local Government Reporter for The Journal
Gazette and previously covered government and politics for several daily newspapers in Illinois.